Externalisation, immigration detention and the Committee on Migrant Workers

Over the last two decades, new immigration detention systems have emerged  across the globe, a direct result of the externalisation policies of wealthy destination countries.

Detention has long played a central role in the efforts of major destination countries to externalise their immigration controls and asylum procedures.[1] Under the guise of combatting the trafficking of people and assisting countries on the periphery of the Global North to better manage migration flows, wealthy States have invested heavily in boosting the detention capacities of transit countries. They have operated ‘offshore’ detention and processing centres, and encouraged neighbouring countries to develop legal and administrative processes that support migration-related detention operations.[2]

An important impact of these externalised detention systems is that they help shield destination countries from having to respect their refugee and human rights obligations, while shifting the site of asylum and migration management to poorer countries where the rule of law tends to be weak or non-existent.

However, a curious and unexpected development has followed closely on the heels of this externalisation phenomenon. The most poorly ratified international human rights treaty, the International Convention on the Protection of the Rights of All Migrant Workers and Members of Their Families (ICRMW), has emerged as a critical arena for advocating for the protection of the fundamental rights of migrants and refugees ensnared in offshore control regimes. As of 2021, the ICRMW has been ratified by only 56 States, none of which are major industrialised, migrant-receiving countries, and many of which are countries that are important externalisation targets.

It is true that the ICRMW does not provide the same protections as those provided by the 1951 Refugee Convention, nor will it ever have the same on-the-ground impact. Nevertheless, the migrant worker convention does provide many important protections.

Importantly, although the convention notes that it is not intended to cover “refugees” (Article 3d), its definition of “migrant workers” is broad, covering all non-nationals (Article 2). Article 16 states that “Migrant workers and members of their families shall have the right to liberty and security of person.” Article 16(4) provides explicit protections for those in detention, stating that migrants “shall not be subjected individually or collectively to arbitrary arrest or detention; they shall not be deprived of their liberty except on such grounds and in accordance with such procedures as are established by law”. Additionally, Article 16 requires the provision of procedural standards for migrant detainees (a frequently overlooked aspect of administrative detention systems), including consular access, the right to be informed of the reasons for their detention, and due process rights.

The Committee on Migrant Workers (CMW), the UN treaty body that oversees implementation of the convention, has given increasing importance to detention, as reflected in its recently released ‘General Comment’ on migrants’ rights to liberty and freedom from arbitrary detention. The Committee has resolutely affirmed that the detention of children for migration-related reasons is – in all cases – a violation of a child’s best interests, a conclusion that CMW and the Committee on the Rights of the Child (CRC) also extend to children’s families. In other words, whenever a country detains an unaccompanied child or a family with children, it is violating fundamental human rights.

Between 2004 and 2016, at least half of the CMW’s reviews of States parties’ implementation of the treaty contained recommendations relating to immigration detention. The Global Detention Project has found that among the CMW’s more frequent detention-related recommendations are: decriminalising migration violations; ceasing the detention of children; employing detention only as a last resort and for the shortest possible period; avoiding indefinite detention; improving conditions in detention; urging provision of procedural guarantees; and, more recently, emphasising ‘alternatives to detention’.[3]

In some cases, the CMW has explicitly connected the abuses of migrants in States parties to the convention with the externalisation efforts of wealthy countries. For example, in 2019 in its Concluding Observations on Libya, the Committee highlighted the severe abuses suffered by migrants in detention or other forms of custody, which it explicitly connected to agreements between Libya and Europe. It also used the Libya report to note similar “cooperation agreements on migration” with neighbouring States, including Chad, Niger and Sudan, and called for guarantees “that such multilateral and bilateral agreements are fully consistent with the Convention”, with the Committee’s general comments, and with its joint general comments with the Committee on the Rights of the Child on the human rights of children in the context of international migration.

Civil society groups are increasingly using the CMW’s treaty review process to raise awareness of how abuses suffered by migrants and asylum seekers in States parties to the migrant workers convention are directly related to externalisation. Thus, for instance, in a 2020 submission to the CMW concerning Niger, the Global Detention Project stated: “Niger has become a central focus of EU migration ‘management’ strategies, with some observers dubbing it ‘the southern border of Europe’. By 2017, EU engagement had included a pilot project to convince migrants to stop their journeys; encouraging Niger to pass a law against migrant smuggling (Act No. 2015-36); a range of capacity-building projects for law enforcement authorities and the judiciary; and increased cooperation in the ‘fight against smugglers’. (As of writing, the CMW’s Concluding Observations on its Niger review had yet to be released.)

There is an inexorable connection between externalisation and the growing refusal by countries across the globe to respect the fundamental rights of non-citizens. In the face of this, it is all the more important today to continuously remind States about their obligations to respect the fundamental rights of all vulnerable people on the move, citizens and non-citizens alike. The Convention on Migrant Workers, despite its poor ratification rate, is a key part of this machinery, one that speaks directly not only to the actions of its Member States but also to those countries in the Global North who have sought to avoid it. By exporting abusive detention practices to neighbouring countries that have ratified the CMW, these wealthy countries become culpable in the violations suffered by migrants, refugees and asylum seekers who have been locked up. 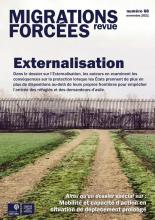