There is a longstanding and well-documented relationship between human displacement and witchcraft allegations.

In the late 17th century, for example, the Salem Witch Trails in New England (which led to widespread executions and imprisonment) took place in an area that was seriously affected by violence and forced migration. According to one author:

“The port town of Salem in the county of Essex lay at the edge of the war zone. Into the county came hundreds of frightened refugees from villages to the north and west that had been raided by the French and Indians. These displaced people spread all over Salem township, including the farming community of Salem Village to the west.”[1]

“When 11 refugees fell ill and died within a single week earlier this year at the Dosseye refugee camp in southern Chad, witchcraft allegations swirled through the community and led to cases of assault and arson.” “In one incident,” it continued, “three siblings died within an hour and Adjara, a widowed mother of eight in the camp, was attacked by 15 others who accused her of cursing the children.”

Recent UNHCR evaluation missions to Angola and southern Sudan have demonstrated that witchcraft allegations can also be an important gender and protection issue in the context of refugee return. In Sudan, for example, the evaluation team encountered examples of allegations of witchcraft against returnees and accusations that they were bringing HIV/AIDS into the community. The evaluation team that visited Angola met an NGO that had been obliged to establish a ‘safe house’ for the protection of older women who had been accused of witchcraft.

Prompted by such evidence, the Policy Development and Evaluation Service (PDES) has undertaken a very rapid assessment of the current state of knowledge about refugee protection and witchcraft allegations. PDES has concluded:

On the basis of these findings, UNHCR’s Policy Development and Evaluation Service PDES is planning to undertake a global documentation and literature review on this topic in an attempt to develop a better understanding of the magnitude and implications of this issue. Anyone who wishes to contribute to this initiative is welcome to contact crisp@unhcr.org. 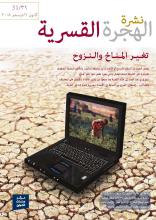