The 1951 Geneva Convention, an instrument to protect the rights of those displaced outside their countries of origin, has turned 50. Instead of being universally celebrated as a cornerstone of international human rights policy, it has come under attack. It is ironic that much of the sniping has come from those same countries which were present and active at its birth, such as the United Kingdom. The close connections between Ireland and Britain in terms of population movements and the designation of a common travel area give rise to fears that the Convention may be undermined in the Republic of Ireland. If this happened it would be sadly ironic at a time when both parts of the island are striving to build peace and a culture of human rights.

Ireland’s deserved reputation for support for peace building and conflict resolution has been recognised by a seat on the UN Security Council. Ireland’s credibility has been further boosted by the recent pledge to reach by 2007, the UN target of providing 0.7% of GNP as aid. At the same time in Ireland the debate on asylum issues has gathered momentum over the past few years as the numbers of asylum seekers, still very small in absolute terms, have grown. Ireland’s treatment of asylum seekers is a key litmus test of its commitment to human rights. Sadly, to date its asylum policies have failed to meet the high standards on human rights it expects from others.

In 2000 applications for asylum totalled 10,920, a figure well below the government’s projected figure of 12,000-15,000. Only about 3% of the cases processed were granted refugee status at first instance; on appeal the numbers granted status almost trebled. At the end of 2000 nearly 13,000 asylum seekers were awaiting a decision on their applications. Many have been in Ireland for two or more years, far in excess of the government’s own six-month target. Given the human distress such long waiting periods entail, the Conference of Catholic Bishops is among those calling for the regularisation of those asylum seekers already in the country. Opposition groups have supported the move but the government has refused to change its policy. Having to wait so long often leads to boredom, insecurity, fear and isolation. Self-respect is further undermined by enforced idleness; only those who applied for asylum by July 1999 and had been in Ireland for a year following their application are entitled to work.

The government’s policy of dispersal of asylum seekers throughout the country has met with protests since its introduction in January 2000. Asylum seekers’ accommodation, food, medical care and basic needs are covered and a small cash allowance provided. Often host communities have not been properly informed in advance of their arrival and planning to meet their needs has often been inadequate.

Even more alarming is the plight of those seeking to enter the country. The Minister for Justice is currently preparing legislation to make carriers liable to substantial fines for carrying people without adequate documentation. Since the amended 1996 Refugee Act came into force in November 2000, evidence has emerged that asylum seekers have been refused permission to land at the port of Rosslare. Others are being refused permission to embark in France to travel to Ireland: a direct contravention of their right to seek asylum. As France does not recognise persecution by armed militia as a valid basis to seek asylum, it is clear that certain groups of asylum seekers are thus being denied the right to make an application. Church leaders and refugee groups are urgently seeking an end to this ban.

Church groups, the Irish Refugee Council and the Irish Congress of Trade Unions are among those arguing that Ireland’s refugee and asylum policy should be based on human rights standards and ethical principles, and not be driven by the numbers arriving at our borders.

We need to embrace the opportunity provided by the anniversary of the 1951Convention to reflect critically on our national performance. Although in some cases a climate of fear and xenophobia has led to attacks on this already vulnerable group, it is heartening that there are also many signs of hope, particularly at community level.

Welcome to the stranger

A recent publication of the Jesuit Refugee Council, Refugees and Forcibly Displaced People, provides an ethical base from which to assess Ireland’s performance. The authors trace the biblical/Christian traditions of ‘welcome to the stranger’, so strong in Ireland’s history, and compare and contrast these to current international refugee policies. They place the Irish experience within a global context and provide personal accounts of life in exile, a situation in which so many Irish people have found themselves across the centuries.

A core message of this book is that, without concerted action to tackle poverty and inequality, conflicts will continue and forcible displacement will remain the harsh reality for many. This echoes the views expressed by Trócaire partners from Asia, Africa and Latin America who came together three years ago at Trócaire’s 25th anniversary conference. These partners drew up a ten-point declaration, the first point of which was that poverty is an endemic abuse of human rights and a form of violence against the poor. Many of the authors of this declaration had been victims of human rights abuses; several had themselves been forced into exile. Most of those able to return home are working to build a culture of peace and human rights and to end the culture of impunity which forced them to flee These are signs of hope for a better world in which determined refugees can go home to rebuild peaceful and secure societies.

Perhaps the greatest contribution of Refugees and Forcibly Displaced People lies in its account of what a truly human response to those who are displaced would look like. It begins by noting that as Christians and as human beings we are one global family travelling together and sharing a common duty to welcome and accompany each other. Experience in Ireland and elsewhere shows us that good refugee/asylum policy is more than a matter of legislation (important through a sound legal framework is). Change must take place at both personal and political levels. The field experience of the Jesuit Refugee Service captured in this new book provides ample evidence of such a process. It highlights the need to listen to the stories of refugees and asylum seekers, to create space for them rather than to exclude them, to welcome them into our churches, our communities and our workplaces, and to celebrate rather than fear the cultural diversity which their arrival brings.

The role of education

In the prosperous Ireland of the Celtic Tiger, formerly known as the ‘Ireland of the thousand welcomes’, the challenge ahead of us is to stop the building of a fortress Ireland within a fortress Europe. If we are to do so, human rights education is vitally important.Mary Robinson, UN High Commissioner for Human Rights, reminded the Irish some years ago that “prosperity brings its obligations”. She identified human rights education as the fourth ‘R’ – the awareness which, with reading, writing and arithmetic, will help us to understand our obligations. The government’s record exchequer surplus provides ample scope for investment in a better asylum system. Ireland’s rapidly expanding overseas development assistance programme provides a further opportunity to put additional resources into development education. In this way people can be better informed of the rights of asylum seekers and our responsibilities, both domestic and international, towards them.

A world suffused by respect for human rights and convinced of the inherent dignity of each and every person would be one where no one would be forced to flee his or her home. In the meantime, while actively pursuing this ideal, (an ideal which was in the hearts and minds of those drafting the 1951 Convention), countries must, at a minimum, ensure that those forced to flee are provided with a place of sanctuary, where they can feel safe and rebuild their lives in a spirit of hope. If we achieve this, Valcarcel and Raper point out, we will not only have a better world for the refugee - we will also have a better world for ourselves.

International Day against Racism took place on 21 March, four days after Ireland’s national holiday in honour of her patron saint and most famous immigrant, Patrick. Patrick’s vision of tolerance and solidarity should inform modern Ireland’s response to asylum seekers and migrants. If Ireland cannot cope with the diversity which a small minority seeking asylum brings to its shores, how can it ever hope to truly celebrate its own diversity, for so long a source of conflict and division?

Maura Leen is Policy Analyst with Trócaire, the Overseas Development Agency of the Catholic Bishops Conference of Ireland. Email: maura@trocaire.ie 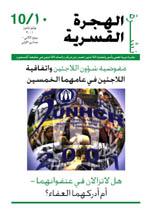