Despite Bangladesh not having ratified the 1951 Refugee Convention, a number of recent court judgements indicate respect for elements of the Convention’s rulings.

When it comes to the 1951 Refugee Convention and its application in Bangladesh in the context of the Rohingya refugee situation, most accounts will state something along the following lines: “Bangladesh has not ratified the Refugee Convention of 1951 or its Protocol […].” While this statement is factually accurate, it does not mean that Bangladesh is devoid of a framework geared towards supporting and protecting refugees. As will be explored here, the Supreme Court of Bangladesh has emerged as an entity potentially capable of upholding the rights of refugees such as the Rohingya.

In May 2017 a bench of the High Court Division of the Supreme Court of Bangladesh handed down a judgement of particular significance. In considering the relevance of the principle of non-refoulement in relation to Md Rafique, a Rohingya refugee being held in detention long after completing a formal prison sentence, the Supreme Court held that the 1951 Refugee Convention had “become a part of customary international law which is binding upon all the countries of the world, irrespective of whether a particular country has formally signed, acceded to or ratified the Convention or not.”[1]

In 2007 Rafique had admitted to illegally entering Bangladesh; he was detained, and proceedings were initiated against him. Rafique pleaded guilty and was sentenced to five years of imprisonment under Section 14 of the Foreigners Act, 1946. The Magistrate further directed the jail authorities to return him to Myanmar after serving his sentence. In 2016, in response to a Writ Petition filed by the Refugee and Migratory Movements Research Unit (RMMRU), the State was required to explain why Rafique, who had completed his five-year sentence in May 2012, was still languishing in prison. On 31 May 2017, after three full hearings, the Supreme Court held that Rafique had been imprisoned without lawful authority since the expiry of his prison term. It further directed the State to immediately release him from prison and hand him over to RMMRU, which would arrange with UNHCR for Rafique’s accommodation in a refugee camp in Cox’s Bazar.

Similar judgements were handed down in 2013 and 2015. In 2015, the Court directed the release of five Rohingya refugees (who possessed UNHCR-issued refugee cards) to be returned to the Kutupalong refugee camp where they had previously been living. The judgement handed down in 2015 makes no reference to the principle of non-refoulement although that is essentially the principle that the Supreme Court was upholding through its judgment.

It is worth contrasting the judgement handed in 2015 with the one from 2017 concerning Rafique. Unlike the five Rohingya refugees from 2015, Rafique was not returned to Myanmar after his release despite not being in possession of a refugee card. The Supreme Court acknowledged that Rafique would be likely to “suffer persecution or torture” and that his life might be at stake if he were to be returned to Myanmar. It rationalised its decision further by referring to the fact that Bangladesh is a signatory to the 1987 Convention Against Torture which provides that States Parties shall not “expel, return (“refouler”) or extradite a person to another State where there are substantial grounds for believing that he would be in danger of being subjected to torture.”[2]

The Constitution of the People’s Republic of Bangladesh refers to international law on two occasions. In the first instance Article 25 (as part of the judicially unenforceable Fundamental Principles of State Policy of the Constitution) states:

This is followed by Article 145A which governs the adoption and codification of international treaties in domestic law and provides that a treaty shall be laid down by the President for discussion in the Parliament. Article 7(2), however, sets out clearly that the Constitution is the “supreme law of the Republic” and therefore overrides both national and international law; as time has progressed, case law has strengthened the understanding that in case of conflict, national law prevails over international law.[3] International treaties need to be incorporated into Bangladesh’s domestic legislation before they can become legally enforceable. This interpretation has been reflected in a number of judgements including Hussain Muhammad Ershad v Bangladesh where the Appellate Division of the Supreme Court held that: “it is [true] that Universal Human Rights norms, whether given in the Universal Declaration or in the Covenants, are not directly enforceable in national Courts. But if their provisions are incorporated into the domestic law, they are enforceable in national Courts.”[4]

It is essential to keep the above context in mind when critiquing Bangladesh’s judicial encounter with the 1951 Refugee Convention. On the one hand, Bangladesh has not ratified the Refugee Convention of 1951 or its Protocol and does not have any national laws addressing refugee matters. On the other hand, Bangladesh is constitutionally mandated to respect international law and the principles of the UN Charter. In light of the compelling argument that the principle of non-refoulement is now a rule of customary international law, it is unsurprising that the Supreme Court of Bangladesh adhered to it, given the absence of a municipal law contradicting it.

Did the Supreme Court go too far when it referred to the entire 1951 Refugee Convention as customary international law? It is unlikely that this position adopted by the Supreme Court was an inadvertent error given that the judgement handed down in 2017 clearly states: “Though Bangladesh has not formally ratified the Convention relation to the Status of Refugees, yet all the refugees and asylum-seekers from scores of countries of the world to other countries have been regulated by and under this Convention for more than 60 (sixty) years. This Convention by now has become a part of customary international law […].”[5]

[6] This research was supported by the ASILE project, which received funding from the EU Horizon 2020 programme for research and innovation under grant agreement nº 870787. 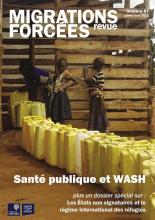