Rural communities in western Mongolia are increasingly abandoning their traditional livelihood systems. Strengthening the rural economy may lessen the need to migrate to urban areas but must take into account the long-term impacts of climate change.

The Centre for Rural Development at Berlin’s Humboldt University recently conducted a study on the adaptation of rural livelihoods to structural and climatic changes in western Mongolia, and found that migration is one of the most common strategies implemented in the search for income and improved living conditions.[1] Since the 2000s, internal migration in Mongolia has been largely characterised by a unidirectional movement from rural to urban areas[2] with the country’s capital, Ulaanbaatar, by far the most popular destination. More than 550,000 people have moved there in the past two decades alone, one-third of the city’s current population.

Surveys suggest that 80% of all newcomers settle in the capital’s outskirts. Ulaanbaatar’s suburbs are known as the ger districts, taking their name from the traditional mobile homes made from felt used by the rural population and which they reassemble in their new urban destination. But living conditions in urban migrant settlements are precarious. Ulaanbaatar ranks among the most polluted cities in the world, in large part due to the burning of coal in the city’s ger districts for heating during winter – creating pollution that has a significant impact on the health and well-being of migrant communities.

Given the rapid influx of people and growing pressure on the city’s infrastructure and public services, to restrict internal migration the government introduced an official ban in 2017 whereby migrants were barred from registering at their new place of residence. Registration is a pre-condition for individuals to access basic public services and formal employment opportunities, and to receive legal support. Unregistered households have no legal basis for claiming housing or being granted permission to use land. Reports by local government officials confirm that pregnant women and newborns are in fact the only groups of people from unregistered households who are eligible for medical services.

However, people without permission to resettle continue to migrate to the city. While registration within a certain time period is required by law, only about half of people proceed with registering at their destination; many expect their migration to be temporary and therefore do not attempt to register. The government’s migration ban subsequently not only worsens conditions for communities at their destination but also distorts data on migration flows.

The annual mean surface temperature over the Mongolian territory has increased by 2.24°C since 1940, and warming is happening particularly fast in the mountainous regions of western Mongolia, home to more than 400,000 people. Rural lives in this part of the country are dominated by pastoral livestock keeping, horticulture and crop production. Recent years have seen extreme weather events – including the country’s notorious winter storms, or dzuds – become more frequent and more devastating.[3] The 2009–10 dzud took the lives of more than ten million animals, equal to 24% of the country’s entire livestock population, hiking up poverty in rural areas to 49%. As extreme weather events have become more severe in their scale, communities and their agricultural production systems are often left in a state of shock, with the rural population forced to resort to immediate coping strategies. Many find themselves unable to cope, however, and decide to abandon their rural livelihoods and move to the cities.

While the direct impacts of climate change may not be mentioned by surveyed households as the trigger point for abandoning traditional agricultural practices, the prolonged economic impacts of such events certainly are. Once the number of livestock held by a household drops below a certain threshold (surveys suggest this is 200 animals), a family’s quality of life is significantly impaired. Those left without any options to either restock or diversify their income locally are eventually forced to migrate in search of alternative incomes.

The severity of climate-induced shock events in Mongolia has in fact become a strong predictor for rural households to drop out of the pastoral economy. The same may hold true for slow-onset events such as decreasing surface water availability due to the melting of glaciers and more frequent drought events. Glaciers in the Mongolian Altai mountains have already shrunk by 30% since the 1940s, and resulting water shortages lead to local conflicts over the use of resources. The situation is set to intensify amid the currently unsustainable use and inadequate governance of water resources.

The underlying vulnerability of Mongolia’s rural communities to the impacts of climate change is embedded in the country’s recent political, social and economic developments. The State-controlled agricultural support system of the past provided those severely hit by weather-related losses with resources, cash transfers and in-kind contributions, ensuring the stability of the rural economy. Since the collapse of the country’s socialist regime in the early 1990s, however, the management of risk exposure has been transferred into the hands of individual herders and farmers.

Today, herders can buy into market-based insurance schemes that issue pay-offs once a mortality rate of 6% of an insured herd is reached. While such insurance helps to mitigate some of the economic losses, asset-poor households are often unable to afford it. Others try to cope by taking loans, adding to the already high level of indebtedness in the rural economy. Notably, what has been found to offer adequate support for loss-affected pastoralists is the aid received from other herders in the form of livestock transfers. A renewed, donor-supported interest in the collective organisation of the rural economy and the formation of agricultural cooperatives further reflects the recognition of the role of social capital in dealing with the impacts of climate change on a local level.

The decision of rural households to migrate is mainly driven by their desire to access stable income opportunities and financial security. Many also seek to reunite with family members who have previously migrated. While women traditionally undertake caring duties and therefore often only limited or part-time income-generating work, they exercise a considerable degree of influence over a family’s decision to migrate. Women play an important role with regard to managing household finances and ensuring children’s access to education, often moving with children and young adults to urban centres while their male counterparts generate income in the rural economy. Such ‘translocal’ livelihoods, while not to be confused with permanent migration, are a common feature of family life in Mongolia, with many families being split during parts of the year at least.

Another important strategy of households that are dealing with external pressures is the diversification of their incomes. As mobile pastoralism and farming are poised to become increasingly difficult due to slow-onset climate change and shock events, many households have started to generate income from two or more sources, usually assigned on a gendered basis depending on customs and the availability of work. This either excludes women from certain income opportunities or creates additional workload.

While income diversification tends to benefit communities financially, it may come at a cost – and not only for female household members. Adaptation strategies, such as the permanent resettlement from rural to urban areas and the take-up of presumably more profitable and stable income sources, may over time erode communities’ long-standing connectedness to place. Central to customs and norms in western Mongolia are beliefs about sacred sites, mountaintops and formations in the local landscape. As communities are forced to abandon traditional agricultural practices and their places of origin, this may eventually lead to substantial disruptions in their tangible and intangible cultural assets, some of which have defined Mongolians’ unique culture for millennia.

To stay or to go?

Although people and rural livelihood systems in Mongolia have historically shown a high degree of resilience, they are now becoming increasingly vulnerable. Serious concerns about the prospects of youth in particular were raised by rural community members during interviews:

“They [youth] all want to go to the [provincial] centres or Ulaanbaatar. […] Very few young people want to continue herding as a herder’s life is quite tough and herders can’t adapt to the climatic changes. […] I don’t have any children who want to be herders in the future. The children want to be educated and then they want to get a job.”

Others paint a more nuanced picture, recognising the absence of decent work opportunities in urban destinations:

“Children from herder families realise, ‘why should I waste my parents’ money to go to university and study something to then not find a job in this field.’ […] Also, herders do not want to be unemployed; this is why they stay in the countryside.”

Holistic solutions for strengthening the rural economy in the long term in order to counteract the need for internal migration as an adaptation strategy may therefore need to focus on:

Current efforts by international donors often either lack an adequate assessment of climate change or tend to duplicate past and ongoing development interventions. Government agencies, development finance institutions and the donor community must better integrate lessons learned, coordinate their activities (in education, health, employment, women’s empowerment and capacity building for youth) and avoid promoting highly carbon-intensive practices that are unsustainable in the context of climate change. Lastly, reflecting the needs expressed by local communities, interventions should take a community-led, bottom-up participatory approach and adhere to the concept of sustainable adaptation by taking the projected long-term impacts of climate change into account when planning projects and programmes. 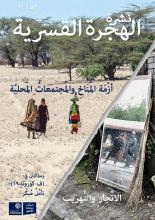