Internet-based technologies are changing the way refugees are able to remain connected to their origins while adjusting to life in a new country.

Nearly 75,000 refugees were resettled in the United States in 2009. Volunteer resettlement agencies across the country offer extensive support services to help refugees settle into US society – such as English and job-training classes, social and community events, and youth programmes.

The use of computers is often central to these activities –  as a tool in the basic skills that refugees may need in seeking employment and in acquiring language skills, but most importantly the internet allows them to stay connected to their past. In the US, computers with internet access are available at local libraries and in most resettlement agencies. Social networks and the information readily available via the internet provide the opportunity for individuals to connect to people and places around the world, even those which have not until recently become ‘connected’.

There appears to have been little research documenting the effects of internet-based technologies in the resettlement process but countless personal stories from refugees highlight the efficacy of such tools in contributing to effective adjustment. These stories provide a framework which further research should build upon in establishing the use of internet and social technologies in the resettlement process.

A Nepali refugee, aged 62, had rarely used a computer before resettlement in the US. “It was difficult, a confusing new thing to learn,” he says. Upon settling into his new life in Colorado, his 12-year old daughter taught him the basics. Each day, he reads the local news from back home on the internet. “I feel so far from home, from everything I have known. If I can read the news from home, a little piece of my old life is still alive and not lost forever. It makes me happier and less lonely.”

The psychological impact of displacement has been well-documented. A common coping mechanism for resettled refugees, according to much research in this area, is the suppression of the past, yet this strategy of adaptation is often both short-lived and ineffective. In fact, the ability to continue to feel connected to one’s roots, and to forge a new though uncertain future while retaining the stability and foundation of past life, eases the transition for many refugees. Checking the news from home, remaining in regular and immediate contact with loved ones, communicating with resettled refugees in other parts of the world… these simple actions, made possible by modern technologies, are changing the manner in which refugees cope with resettlement.

Two young refugee women from the Congo, both aged 19, had access to computers in their refugee camp in Zambia. “We learned English on the computers and practised typing,” one says. “We emailed our friends in other camps and our family members who had already been resettled. We heard their stories and knew what to expect. It made moving to the US a lot easier, and we knew we could stay in touch with our friends from home.”

Many younger refugees have often been using the internet socially for years; however, people resettled from more remote areas of South Asia and Africa have often never used a computer before and the task of learning this new technology is daunting.

An Iraqi refugee, aged 43, is the mother of two girls, aged 14 and 16. “They love the internet, always on Facebook or Gmail chat,” she says. “At first, I knew they were using it to stay connected with old friends. I knew this was good for their mental health but I worried that they would not make new friends here in the US.” “But it makes it easier to make friends here, too,” says one of her daughters. “Kids here, they see that we are on Facebook and we have lots of friends and enjoy lots of activities. They realise we have something in common, and we become friends online. I am shy and nervous at school, and this is a good way to start friendships.”

International programmes specifically designed for refugee populations have emerged in recent years, often with a creative take on the potential value of social networking. Refugees United, for example, offers online profiles similar to Facebook, where refugees can search for lost family members.1 Innovative approaches to social technology offer new and exciting opportunities for those being resettled but refugees do not necessarily require sophisticated technological tools; the simple acquisition of an email address can offer the invaluable ability to stay connected.

Technology certainly changes the process of resettlement for thousands of refugees worldwide each year. Further exploration of its impact, uses and access issues would help resettlement assistance programmes to provide and improve specific services for refugees adapting to a new life.

Jennifer Flemming (jennifer.flemming@student.ucdenver.edu) is a Masters student in Public Health and Medical Anthropology at the University of Colorado, Denver, and works as a health coordinator for refugee resettlement in Colorado. 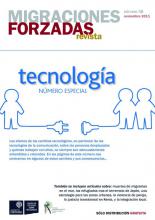