Therapy in Uganda: a failed MHPSS approach in the face of structural issues

While the combination of therapy and livelihood creation may appear to be beneficial for refugees’ mental health, the reality in Uganda has been rather different.

The past 30 years have seen an unprecedented rise in attention towards the mental health of conflict-affected populations. The World Health Organization (WHO) estimates that the burden of mental disorder among conflict-affected individuals may be as high as 22% and to be particularly prevalent among refugees and forced migrants.[1] This is certainly the case in Uganda, where the mental health needs of the large number of displaced people have been described as dire and largely unmet, despite MHPSS interventions being a common part of the humanitarian response.

In Palabek, a settlement of more than 54,000 South Sudanese refugees in northern Uganda, programmes range from psychoeducation sessions[2] targeting large groups to the prescription of medication for the most severe individual cases. However, as in most humanitarian settings where resources are scarce and qualified professionals few, mental health assistance in Palabek largely consists of brief psychological interventions targeting common mental disorders such as anxiety, depression and post-traumatic stress disorder. By far the most common among these interventions is a brief form of Cognitive Behavioural Therapy (known as CBT-T), with at least six different NGOs delivering it in Palabek refugee settlement alone.

CBT-T offers important advantages in severely resource-poor contexts like Palabek, despite the fact that its therapeutic effects have been found to be questionable.[3] CBT-T consists of ten sessions that can be delivered to groups on a weekly basis by minimally trained local staff. In Palabek the therapeutic component is often accompanied by a livelihoods component, focused on entrepreneurship. In Uganda, whose national refugee policy is dominated by a self-reliance narrative, CBT-T is a perfect fit as it allows for the confluence of two powerful discourses: the moral imperative to alleviate refugees’ (psychological) suffering, and ‘helping refugees help themselves’, which sees entrepreneurship as the best way towards from emergency assistance. However, these interventions can have detrimental effects on refugees’ mental health when carried out without carefully considering the context of their implementation.[4]

In Palabek, NGOs offering CBT-T primarily target women, selecting those who meet the criteria for common mental disorders after undergoing a diagnostic test. The groups are taken through ten sessions of CBT-T, after which the refugees undertake a one-day financial training where they are taught the basic skills necessary for running a small business. After the training, the group of women is given a small sum of money which they are encouraged to use to start a joint business activity among themselves. Some groups choose to start raising poultry or goats, while others prefer selling sugar, soap and other everyday items. The succession of the steps – that is, receiving therapy before receiving funds – is non-negotiable, and no one can request to partake in the livelihood creation part of the intervention unless they have been through the CBT-T part. The reason, as given by a CBT-T trainer, is that: “We give them CBT so they can forget the past. […] You cannot give money to someone who is traumatised, because they will just throw it away.”

NGO workers leading the CBT-T sessions are adamant that CBT-T is the main part of the intervention and that the refugees are eager to receive therapy. However, interviews with several women from different cohorts of the programme suggest that this view is not necessarily shared by refugees: “They told us when they first came [to recruit us] that they would give us money, and that that could make us forget about the past and change our lives. That is why I went, because my children needed clothes and I have no money at all.” This hints at a fundamental and often overlooked issue in the delivery of psychological interventions in contexts characterised by extreme poverty; while CBT-T – an intervention firmly rooted in Western notions of personhood, suffering and healing – places the cause of the suffering inside the individual, participants in countries such as Uganda will often view their distress as a consequence of socio-economic hardship. They will therefore seek a solution to it not so much in the form of self-help techniques but rather in an actual change in their circumstances.

The assumption underlying CBT-T interventions delivered in Palabek refugee settlement is that after undergoing therapy the women will be firmly on the path towards recovery from their psychological distress and be ready to become independent and successful economic actors. This was unfortunately not the case for most of the women interviewed during the course of this study. For example, women from three different CBT-T groups reported that none of their groups had been able to successfully open and run a business, despite the fact that the majority had at least some level of experience in trading and business in South Sudan before fleeing to Uganda. To understand why this approach failed – and, furthermore, had detrimental effects – it is necessary to look at the wider context of Palabek settlement, taking into account the structural challenges that refugees face in this setting.

Palabek is located in one of the poorest rural districts in Uganda. The plots that Uganda assigns refugees for cultivation are too small to allow for anything more than small-scale and subsistence farming, and the rocky nature of the land frequently prevents even that. Kitgum Town, the nearest economic centre in a region still struggling with the heavy and long-lasting socio-economic impact of a recent and bloody civil war, is 40km away and expensive to reach (and the roads are often impassable). In this sense, refugees living in the settlement are significantly cut off from the lively economic market that characterises other areas of the country. Even after undertaking the cost of travel and of purchasing merchandise in Kitgum, the women were faced with the exceptionally slow-paced economic reality of the settlement. In the words of one woman:

“I went to Kitgum and bought sugar and lacere [small fish] to sell. But there was no one to buy it... We tried to sell, but people have no money here.”

Even the groups that were able to sell all the produce they invested in found that the profit was too small, and business too slow to justify pursuing. Most importantly, however, they had more pressing needs to attend to. The refugee emergency in Uganda is greatly under-funded so food and other basic needs are never adequately met. The women were unlikely to make enough to do more than meet their immediate needs – with no opportunity to build capital.

As for their mental well-being, none of the women interviewed reported an improvement in their psychological distress, while some added that they felt even more hopeless than before undergoing CBT-T. “They told us they would help us forget, but they gave us even more problems. […] The money they gave us was too little, and now I keep thinking that I cannot do anything.” Another bluntly stated: “The programme made my life worse. I took the money and bought food and clothes for my children, but I could only buy for some of them; the others have been angry at me since.” A third commented: “They said we could change our lives […]. They treated us like fools.”

What is refugees’ mental health really about?

The experiences of these women constitute a call for a critical re-think of the design and implementation of brief psychological interventions in extremely resource-poor settings. In particular, a few key features of mental health interventions based on self-help techniques need to be recognised as deeply problematic. By establishing a straightforward connection between mental health and the achievement of economic independence, they run the risk of medicalising conditions of poverty. And by focusing solely on individual responsibility (both through teaching self-help psychological techniques and through their emphasis on entrepreneurship), they fundamentally ignore the structural and wider issues faced by people living in protracted displacement.

Those participating in CBT-T interventions in Palabek claimed that the amount of money they received was too small to meaningfully affect their lives; if anything, the realisation of how insufficient the sum they were given was led to an increased sense of frustration and hopelessness. It heightened their sense of precariousness and only made planning effectively for the future a less realistic possibility. Mental health assistance such as this needs to be fundamentally re-thought, with an explicit focus on the structural barriers that keep refugees from planning and working towards their future, and on the negative impact of social justice issues on individuals’ and communities’ well-being.

[2] Providing education and information to those seeking or receiving mental health services.

[4] Findings based on interviews with participants in CBT-T interventions during 13 months of ethnographic fieldwork in Palabek refugee settlement 2019–20. 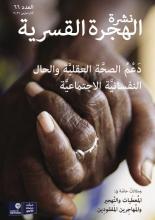